Agueda I. Johnston Middle School is located in the central village of Ordot, on the beautiful island of Guam. Originally known as George Washington Junior High, Agueda is a WASC accredited public middle school.

From Hagatna
Take Route 4
Make a right after Sunshine Plaza
Pass the Ordot, Catholic Church
Agueda will be on the left hand side 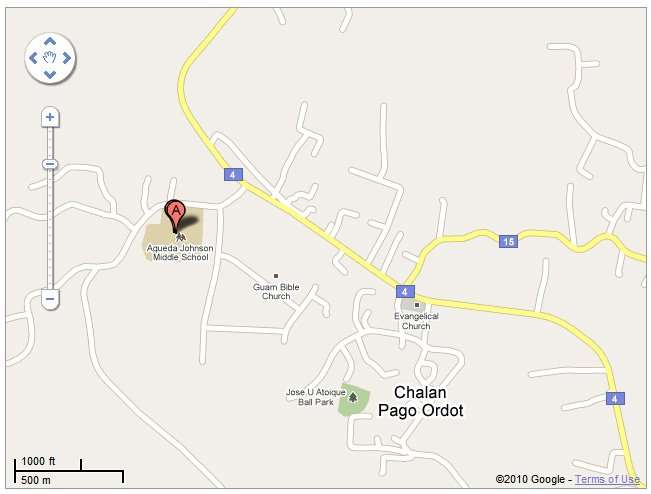 About Agueda I Johnston 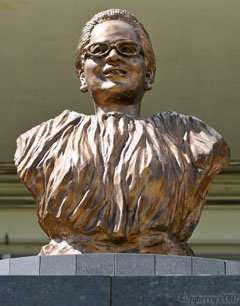 Established in 1966, George Washington Junior High School located in Ordot/Chalan Pago, Guam, was renamed the Agueda Iglesias Johnston Junior High School by Public Law 12-76, enacted on January 15, 1974. On December 12, 1979, the school was formally dedicated in her honor. In 1982, when the Guam Department of Education established the middle school concept within the Department of Education school system, the school’s name changed to Agueda Iglesias Johnston Middle School, as it is known today.

Agueda I. Johnston was born on December 12, 1892 in Hagåtña, Guam. She attended public elementary school, as well as the U.S. Naval Government High School and the Normal School for Teachers on Guam. She received additional schooling at the American Correspondence School in Chicago, Illinois; and the U.S. Naval Government of Guam college equivalency as part of the College of Guam. On June 12, 1968, she received an honorary Bachelor of Community Services from the College of Guam. On March 10, 1976, Johnston was granted a Degree of Humane Letters from the University of Guam.

Agueda Iglesias married Navy Lieutenant, William Gautier Johnston, an English teacher of hers in 1911. When the Japanese invasion of Guam occurred in December 1941, Johnston’s husband William was taken prisoner of war and imprisoned in Kobe, Japan until his death. Together they had seven children: Cynthia, Margaret, Herbert, Joseph, Marian, Thomas and Eloise.

Johnston is considered a pioneer in education on Guam. She began teaching in 1910 and is known for always promoting teaching and learning and being a strict disciplinarian. She taught until 1925, when she became Principal of the Almacen Grammar School, Guam’s first junior high school, working there until 1936. She was also the first Principal of George Washington Senior High School, serving there from 1936 through 1946, resuming her position following the Japanese occupation of the island. Following her teaching and administrative positions at the schools, Johnston served for seven years as the Superintendent of Schools and as an educational consultant.

Beyond her devotion to education, Johnston was an ardent public servant. She served the community in establishing key organizations on Guam that continue today. She was a leader in the Guam Women’s Club, the American Red Cross Guam Chapter, the Guam Memorial Board of Trustees and the Guam Board of Education. She also founded the Guam Girl Scouts and was the lead project director for the Servicio Para I Manamko elderly service organization and the president of the Guam Association of Retired Persons.

Johnston is credited with establishing the Liberation Day event on Guam that is celebrated annually on July 21st. One year following the American reoccupation of the island, she convinced Army and Navy leaders to support the celebration for the best interest of the military and civilian communities.

Of special note is Johnston’s personal interest to assist those in need including George Tweed, (the sole American on Guam during the most of the Japanese occupation) during the early days of the Japanese occupation of Guam. She was beaten by the Japanese for being suspected of helping Tweed. Agueda bravely assisted American fugitives and others by disseminating information about the progress of the war. She operated radio receivers and incorporated important messages in soap products manufactured by her family during the war.

In 1982, Johnston was inducted into the Guam Educators Hall of Fame. Over the years, she earned many distinctions for her educational, public service and civic contributions. She served as an educator for approximately forty-seven years until her death on December 20 1977, at the age of 85.

Today, the census for Agueda I. Johnston Middle School reflects a student population of approximately 800. Each year during the week of her birthday anniversary, the faculty, staff and students honor her in an assembly that is held at the school. Surviving Johnston family members and guests attend the ceremony at the school campus.

Our School-wide Learner Outcomes (SLOs) Prepares all students for life, Promotes excellence and Provides support for all learners to become:

P roblem Solvers Every student at AIJMS will…

I nnovative Thinkers Every student at AIJMS will…

R esponsible Contributors Every student at AIJMS will…

A cademic Achievers Every student at AIJMS will…

E ffective Communicators Every student at AIJMS will…

Be Notified of New Posts

How to Protect Yourself & Others

Use of Cloth Face Coverings